I’m going to need the help of my straight friends and LGBT allies on this post, because many homosexuals will not like what I have written below. In fact, I’ve seen homosexuals reject the below idea without giving it proper consideration. So it’s no surprise the below blog starts with a bang. 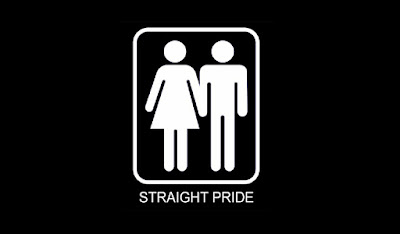 Anyone who thinks THERE SHOULD NOT be a #HeterosexualPrideDay is a bigot. I'm not judging, it's just a fact based on the dictionary definition of the word bigot. (a person who is utterly intolerant of any differing creed, belief, or opinion.)

To that I will add this, please don’t make this about YOU.  Your Heterosexual brothers and sisters need your support and many are afraid to ask you for it. More on that towards the bottom.  They don't need your judgment right now, they need your support.

Heterosexual Pride Day (my version of it) is about celebrating the Heterosexual experience. Let Heterosexuals share with the world why they love being heterosexual and why it works for them.

If Heterosexuals want a day to recognize their common experience and maybe even parade down Main Street to express their orientation and LOVE for one another why would anyone want to oppose that? After all, if at the core of Heterosexual Pride Day is sharing the LOVE for the opposite sex as oppose to hate for Homosexuals then there is no harm done.

Does a Heterosexual Pride Day seem silly and unnecessary? Stop and think about this: we have National Donut Day, National and International Sushi day, not to mention, national take your dog to work day. Seriously, let the Heterosexuals have their day.

I seriously fully support an International Heterosexual Pride Day and you should too, here is why:

We all know that there have been LGBT Pride Parades since the 1970s. Some of you know first hand the struggles challenges LGBT folks have gone through and are STILL facing today simply because of their sexual orientation. That being said, if you have ever been to a LGBT Pride March/Parade you know that the Parade/March is more than a political statement, it’s more than the commercialization of an event that had it’s roots in the fight for equality, it is also a cause for CELEBRATION. Why should this celebration be limited to LGBT folks? Why not have our heterosexual allies have a day where they too can express their sexual orientation? Again, I’m talking about LOVE for Heterosexuality, I’m not talking about HATE for Homosexuality. Don’t get it twisted. You can certainly have one without the other.

Before I go further it's best to point out that the folks that represent the T in LGBT can and some do self-identify as heterosexual so it's best we make clear that when I mention Heterosexuals in this post I’m not really talking about the T folks, although they of course make up a portion of the heterosexual community as well as part of the gay community.

So who are these so-called “Heterosexuals" and do they really exist?

A common experience in the LGBT community is to tell one's "Coming out Story." Run a search on YouTube for Coming Out Stories and you can spend days watching one coming out story after the other. There are so many coming out stories in fact there are organizations such as I'm from Driftwood (https://imfromdriftwood.com) which is dedicated to document these touching stories.

Break down what a Coming Out Story actually is and you will see that many have a common theme:

- The realization you are or feel different from your peers,

- An internal struggle to tell someone about your same-sex attraction, often times while experiencing crippling fear,

- Maybe even telling the story of your first same sex kiss

It's time for Heterosexuals to share their Coming Out Stories.

It goes without saying that most Heterosexuals probably had little to no external resistance based on their sexual orientation. That is not to say that they didn’t experience fear and possibly shame when it came to having sexual desires for a person of the opposite sex. Lets not forget that many boys and girls when young think that the opposite sex have “cooties.”

A Heterosexual Coming Out Story has many common themes.  The three most common are:

- Realizing they are attracted to the opposite sex (sexual awakening),

- Wanting to play sexually with the opposite sex (not having a clue how to go about it),

The Fourth and Fifth common theme is (some Heterosexuals are more aware than others):

- The realization that there are people in this world that are NOT Heterosexual.

- And of course, the realization that there are some men who have vaginas and some women who have penises (aka Trans Folk) and the fact they may be attracted to either of them, neither, or both.

And the Sixth part of a  Heterosexual’s Coming Out Story is:

-  The fact that they may have experimented with folks of the same sex but then realized through the experience it simply wasn’t something that resonated with them. “Not that there is anything wrong with that.”

In my humble opinion the latter is of the upmost importance: Heterosexuals ought to talk about their same sex desires and possible experimentation with a person of the same sex. This will clearly illustrate that it’s ok to be open sexually if one is curious and to not demonize or ridicule a person for experimenting with their sexual orientation.

So you don’t have same sex attractions, it’s ok.

Yes it’s true you might have been very nervous and scared during your first sexual encounter since the person you are attracted to doesn’t have the same body parts as you, it’s ok.

Don't lash out at Homosexuals.  Tell us YOUR story .

In early 2016 I made a video discussing Straight Men Who Love Femininity. You should watch it.

You see, if you are deep in gay culture, or deep in straight culture you may not even be aware that there are Self-identifying straight men who enjoy having sex with a Crossdresser, Pre-Op and/ or Post-Op Transexuals. You see, they are not really attracted to Masculinity. Many of these men don’t quite feel they are part of the LGBT community and they feel ridiculed by the straight community. They feel like outcasts, and many are deeply in the closet.

Many straight guys feel a sense of shame for being attracted to and even dating a trans woman.  Many have thoughts such as "My buddies are going to make fun of me and my family will disown me if I fall in love with a trans woman.  I'm not gay, I'm straight.  I like women, even women who were born male."

Since I posted the above video I have received numerous emails and messages thanking me for putting into words how they feel. Many self-identifying straight men have come out to me via email and in person. That's right STRAIGHT MEN COMING OUT OF THE CLOSET!  Simply look at the video comments section and you will see why there is a need for Heterosexuals to have a Pride Day of their own. 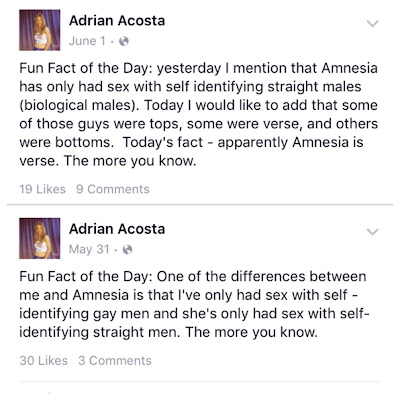 A while back I wrote a post titled “Some Gays Are Ignorant and That’s Ok” where I discuss how some gays might be a bit too deep in gay culture to see the gray area that exists between the Gays and the Straights. The metaphorical bridge that connects both cultures. You ought to read it. http://genderfun.blogspot.com/2013/05/some-gays-are-ignorant-and-thats-ok.html

I wrote that post over three years ago. I was hoping by now we’d all be a little more understanding of each other’s life experience.

The second we stop listening and finding common ground between our experiences, the second we stop collectively celebrating our differences is the moment we “ghettofy” ourselves, we self segregate ourselves and we adopt a tribal mentality that is bound to pin us one against the other. We are better than that.