Did I ever tell you that a few years ago I dated a fine young man who attended UC Berkeley? We had a short romance but I still hold fond memories of our time together. He ended up in Forbes 30 under 30 so don't worry, he's doing just fine. And no, he was not a part of the violent riots that took place on campus recently.

Why were there riots at UC Berkeley you ask? It's pretty complicated but let me summerize it for you: a gay jewish immigrant, who sleeps with black guys was scheduled to do a presentation and well...some folks didn't like that idea. So they thought a better idea would be to break windows and set things on fire causing an estimated $100,000 in damages.

You might think "well that sounds a bit like an overreaction." You don't want someone to do a presentation so you set things on fire? It's sorta like when someone aledgely cuts you in line and you become so angry that you target their immigrant status to insult them for the whole store to hear. Overreaction, yeah, probably.

Seems folks are being triggered left and right these days. One could say that folks are so stressed that just about anything might set them off.  Just about anything can be a trigger these days, as if everyone is suffering from PTSD. You say the wrong thing and poof someone starts yelling in your face. You're not as upset as your concervative friend then clearly you must not care about the state of the country. You voted for Trump then your Liberal Facebook friend demands that you unfriend him. You use the word "Tranny" and you are excomunicated from the T in LGBTQ. Must we use "Trigger Warnings" prior to exercising our 1st Amendement right then?

Now of course using the word Tranny can cause a great deal of upset even when used as a term of endierment, but especially when said malisiously to a Transgender person. Just look at these horrible things said in the following site click link

Being exposed to such language combined with law makers trying to police public restrooms can begin to convince you that the world you live in is not a safe place, and that simply walking outside your home equates being bumbarded with triggers on a daily basis.  It becomes sensory overload and you simply tune out...until you blow up!

There has been lots of talk about the use of trigger warnings and safe spaces in Universities such as that of the University of Chicago in the past few months. Heck, I have even used the term "Safe-Space" in conversation when describing the space I created in order to perform Male-to-Female makeovers. However, the irony of the concept of a "Safe-Space is not lost on me. In reality a "Safe-Space" is simply "The illusion of Safety" as we learned in the movie Fight Club.

My idea of a "Safe-Space" is an environment where awareness is brought to anything that is discussed, a zone where there is a free exchange of ideas.  Nothing is off-bounds.  You have something on your mind, let it out while in my makeup chair.  Bring it to light.  Let's explore it.

I do understand that some folks are uncomfortable discussing topics for which they have limited knowledge.  But how can we learn from each other if we don't knock down those walls between us?

We are living in interesting times.  As Susan Jacoby author of  The Age of American Unreason said:

​ "The Parents of baby boomers dreamed of educating a son who would work with his head instead of his hands and daughter who would marry a man capable of earning a living with his head and not his hands."

Here we are living in a period where sons are turning into daughters and where manual labor jobs are being shipped to other countries or taken over by machines.  Add to that the perceived fear that immigrants are threatening our way of life, especially if they don't plan to assimilate.

​"Between 1860 and 1910, in spite of the deaths of more than six hundred thousand men in the Civil War, the American population nearly tripled - from some 31 million to more then 92 million - as a result of immigration from Southern and Eastern Europe...a raw number that would seem to rule out any possibility of successful assimilation or absorption." - Susan Jacoby

So in all this noice and chaos how is one expected to find happiness?  Is the pursuit of happiness even relevant?  What is the goal of all of this conflict anyway.  Let's see what Sumner has to say  in the  "Reply to a Socialist" 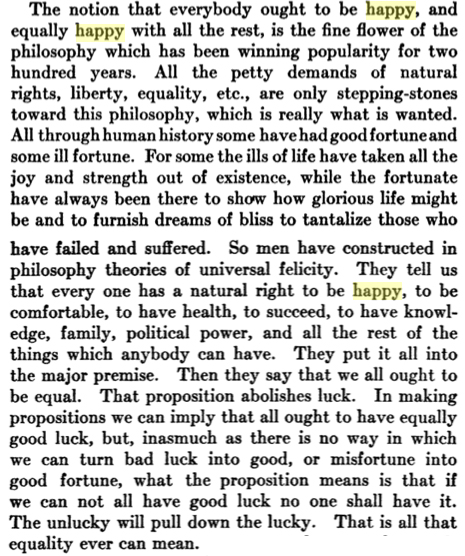