​ Trump's America: Inside and Outside 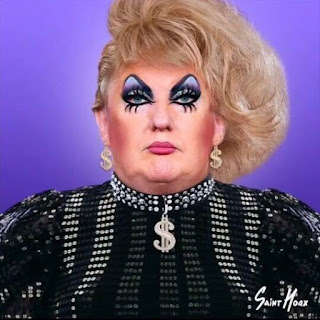 Lover boy and I are naked in bed. We are taking a breather after completing a sex marathon. Cue the pillow talk. It has become almost a ritual between us to have wild mind-blowing sex for a couple of hours prior to delving deep, oh so deep, into each other's psyche. Our bare bodies are still burning as the sweat begins to dry. My wig is a rattled mess beyond "bed head" and my makeup is completely smeared making me resemble a Picasso painting. I don't care, I'm in bliss. We caress each other as we embark into a stimulating conversation.

He begins by telling a story of when he and his family were recently at a restaurant. In a near by table is a white old lady. She is shooting him daggers with her eyes for no apparent reason. I must mention that loverboy is an Asian man in his 30s, muscular, built like a brick house and he is covered in tattoos from head to toe. His body, in my eyes, is a work of art, absolutely beautiful. However, I can see how to others, at a glance, he looks like a rough dude, the kind of guy old ladies would clench their purses tightly to their bodies if they found themselves alone in an elevator with him. If you had to guess his sexual orientation you'd say he is absolutely straight. There is nothing fruity or stereotypically gay about his demeanor.

God knows what the old lady at the restaurant was thinking. How was she judging him in her mind? Her disgust was written all over her face. Sure, we could give her the benefit of the doubt and diagnose her with "BRF, Bitchy Resting Face" but in this hostile climate we find ourselves here in America she could have very well been looking at his tattoos and thinking "Look at that disgusting immigrant punk chink."  Never mind the fact he was born in America.

I hear the hurt in my lover's voice. I sense how much this old lady bothers him although he tries to keep the mood light peppering the story with a few jokes. I like him a great deal, so when he hurts I hurt too. He's a really sweet guy on the inside but with a tough looking exterior. He is the walking reminder why we ought to never judge a book by its cover. Not only has he gotten nasty looks by an old lady in a restaurant but he has told me about instances of dealing with police profiling, a much more serious situation.

I wonder if he tells me these stories because he knows I understand what it's like when the world reacts to one's physical presentation in a negative way. If so then he's right, a part of me understands. Although our presentation and race is different we have both been on the receiving end of discrimination based on the way we look. A lot of my clients and subscribers on YouTube and Facebook have been there as well. Many of them will tell you that one of the biggest reasons they don't crossdress in public is because they fear that someone will attack them verbally or physically based on their presentation. Many are highly concerned with "Passing" because of this very reason. Some have even emailed me asking for tips on how to crossdress in public.

We've heard stories of some folk recently using the term "Trump's America" or "Trump Country" as an excuse to attack those who may have a outward presentation some people hate. This is completely unacceptable and highly unproductive. It certainly will not make America great again. It seems that, now more than ever, we must search inside ourselves and each other to find our common humanity...hopefully doing so after completing a sex marathon of course.