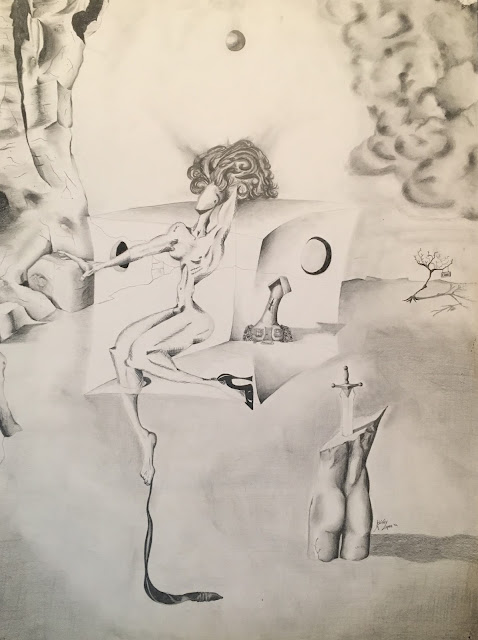 My week started with another painful yet productive electrolysis session followed by a slow bodily decline into a burning fever.  The flu-like symptoms attacked full force.  I spent half the week laying down, sleeping, or in a fetal position with every inch of my body aching.
I'm better now.

The interesting thing about breaking a fever is how life seems anew.  Like Dorothy coming home from Oz, was it all a dream?

When you are confined to a bed for days while your body fights microscopic creatures seems the mind decides to take a stroll through Random-Town.  Out of nowhere I ask myself "Is my old art portfolio still tucked away in the closet?"  Shortly after gaining some strength I simply had to quench my curiosity.

I put on my ballet flats and gradually made it to the closet .  Out comes the dusty portfolio.  I open it.  I see a piece I drew 15 years ago!  I literally let out an audible gasp.

I'm not one to explain what my drawings "mean" but I will break down the imagery of the above piece Androgyny.

At the center of the piece is a levitating long haired faceless humanoid figure.  They have a breast on one side and a pectoral muscle on the other side of the chest as well as ambiguous genitalia.  The body language suggests pleasure but the tension of the arm and hand reaching out could be due to  pain.  The figure seems to be in/coming through/or coming out of a translucent box that defies the laws of space.  The same side where the hand is coming through a hole in the box is also the side that doesn't exist since the foot wearing the heel is coming out of the box.  So, does that side of the box exist or doesn't it?

The other leg is coming through a hole at the bottom of the box.  This foot is bare but has what seems to be a black condom oozing from it all the way to the ground.  Follow the direction of the condom's tip and you arrive at what appears to be a stone sculpture of a male's lower back and buttocks. 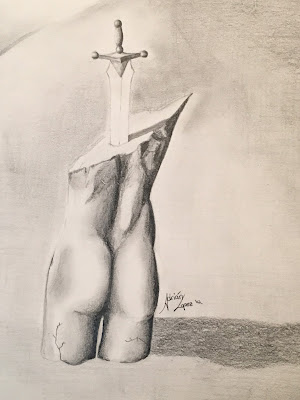 The legs show a few cracks.  A steel sword is deep in the stone torso as if acting as a spine.  The torso is facing a small house in the distance. 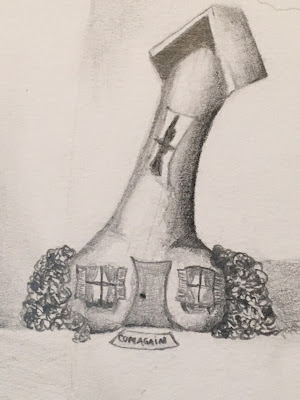 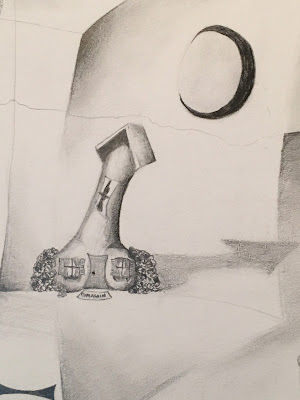 You pull out a bit and you notice the house is casting a shadow.  Follow the shadow through the barren landscape and it leads you to a dead tree near the horizon. 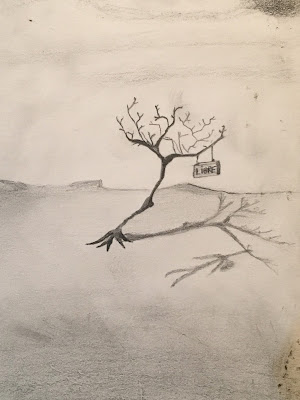 A sign hangs from the tree that reads "Libre" (Spanish for "Free").  The shadow that the tree casts is that of a person that's been hanged. 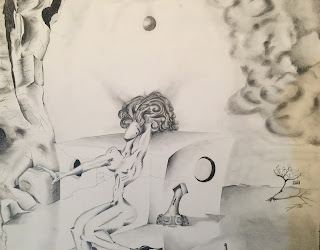 As you pull back you again see the rock formation to the left of the drawing and the dark smokey clouds to the right.  If you squint your eyes you see that the negative space between them are child bearing hips.  The floating sphere in the sky has now become a naval, and the faceless figure's hair has become the pubic region of the hips. 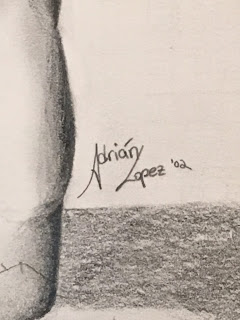 This could very well be THE LAST, piece I ever did where I signed it using my legal name Adrian Lopez.  In 2003 I would start using my mother's last name Acosta.