Spotlight on a Minority Exposes Deep Pain of Many 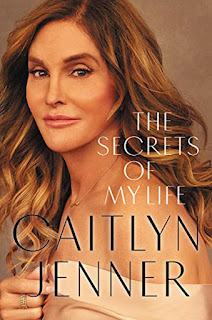 I have a secret to tell you.  First let me tell you a short story.

​ I was having a casual conversation recently with a business executive. He was telling me how he and his friends were having a bit of a competition. The goal was to see which one had it worse at work. This executive LOST THREE admins in the span of three short years.  He lost one admin to a heart attack, another to cancer, and a third...well, the laziest way to describe what happened to the third is to say she lost her mind. Clearly he felt his work "misery" won over his friend's work misery. Comparing loss is like comparing air, you are both holding nothing in your hands.

​ This brings me to news you might find a bit miserable?  This week Caitlyn Jenner published a new book "The Secrets of My Life". The new book is a memoir, so it looks to be different from past books she's published.

​How can someone who you never met in person possibly cause any misery by publishing a book you ask?

​You see, some folks are not happy with how Caitlyn has conducted herself over the past two years since she came out of the closet. You might be asking yourself, what did she do? Who did she hurt? Did she attack anyone? Well, she was involved in a deadly car accident in 2015 but that's not why some folks are upset with her. There were some PROS posted as well but since this blog post is about misery let us not tip the scales just yet.

So let us shift our focus from Caitlyn and focus on the negative feelings people are experiencing over her actions and public presence.  Here are two examples from our Gender Fun Facebook Page of what these individuals think of Caitlyn.

And now lets go deeper.  Let's go to one of the big issues folks have with Jenner. 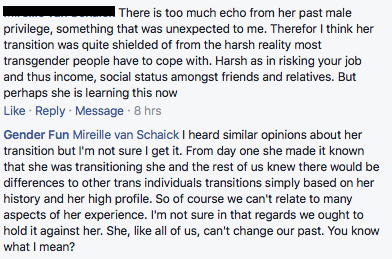 I think this might be at the core of so many people's unhappiness with Jenner.  On one hand she is like us, and on the other hand her experience as a trans individual is so unique and different it's hard for us to relate to her.  How many of us are Olympic male champions who became women in the public eye?

I strongly believe that the Trans/Gender Non conforming community is longing for a champion and the disappointment of finding out that Jenner is not that champion is bubbling to the surface a collective individualized pain.

I heard it once said that we are all role models and/or examples.  A role model is someone you look up to and an example is someone we try to avoid being like.  I think we can learn from Jenner's mistakes in the public eye without isolating her and making her an enemy.  She may have been a champion to many in her past but it seems she might be an example of what not to do in the present.

Let us not compare our misery to that which Jenner went through.  Her experience is her own and her mistakes are hers to live with.