The In-between Gender That is Ok 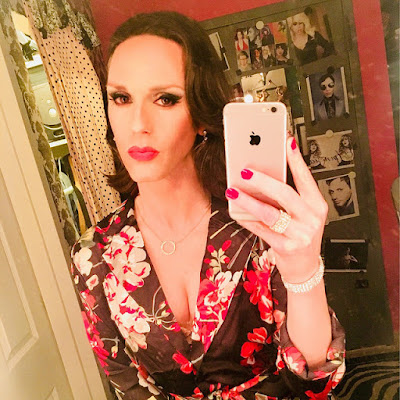 My primary physician is a transwoman. My electrologist is a transwoman. I attend a monthly transwomen pizza party where we casually talk about the trans experience. As I mentioned a while back, I personally don’t think of myself as a transwoman. I think of myself as a gender-variant, gender non-conforming individual who is going through a feminization process and who now presents in public both in androgynous form and, depending on the day of the week, in a more traditional male or female form.

When I strut down a busy New York City sidewalk wearing my dark sunglasses, my woman’s booties, woman’s cropped leather jacket, and tight jeans as my long hair blows in the wind I see guys look at me differently than when I presented in a more traditionally male form. It’s a curious look. A look that is hard to read but could be interpreted as “well this guy can’t be a straight dude.” And let’s be honest, they are correct to assume that in this case. Their looks seem to say “we are going to put this person in the “other” category. Being that I consider myself a non-binary individual those looks don’t bother me a bit.

I’m lucky that I live in New York City where it’s less fearful for trans individuals who don’t “pass,” where you don’t have to fear for your safety just because you have been put in the “other” category. That privilege never escapes me. 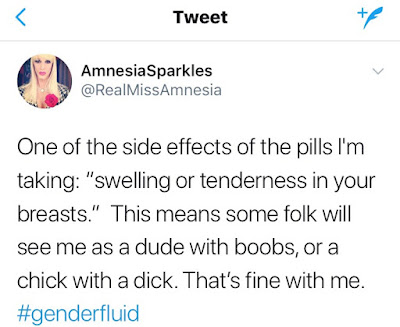 As I mentioned on Twitter recently I understand that because of my physical appearance some folks are going to see me and treat me as part of the established, and what may seem, an outdated gender binary. I get it.

It is not my mission to tell people how they should feel or act around gender-variant individuals. But as I’m learning, from experience, my visibility in this world every day is important. It’s important to show and represent my inherent diversity. It’s important to feel authentic and not like I’m playing a gender role I was expected to play based on my genitalia. It’s important that I feel free and open as I walk down the street instead of feeling like I have to pretend, or feel obliged to put up a wall in order to hide a secret, or conform to societal norms that are not true to my heart.

Sometimes I think that the gender binary wasn’t just created to keep biological women from reaching their true potential in life but to also mentally imprison man from reaching their personal physical, emotional, and spiritual potential. Then there are times where I think the gender binary was socially constructed so that gender variant folks can dig deep within themselves to find the courage to break down the social norms by going out into this world as they feel they were intended: free to be who we are, and look the way we want. The reality is that some folks feel more comfortable fitting nicely within the gender binary while others are ok painting outside the lines. In the end we are all walking on a busy sidewalk on our way to meet the ones we love.

I believe it was Ralph Waldo Emerson who once said “Its not the Destination, It's the journey” (that counts). Wise words to remember next time you see someone pass you by that seems a bit out of the norm. Like you, they may well be on the way to meet up with a loved one, someone that makes this life experience a bit less daunting and more enjoyable. ​
Labels: adrianacosta gender