Too High on Toxic Masculinity 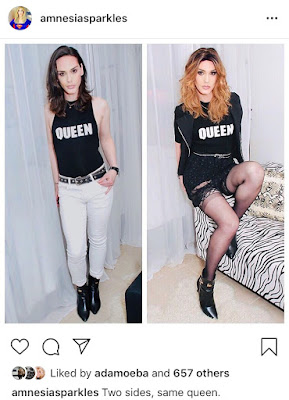 What: Conversation with an apparent Internet Troll suffering from Toxic Masculinity
When: 3/19/19
Where: Comments section on one of MY Instagram pics (seen above)


Before we dive into the actual conversation, trust me you're gonna want to read this one, let me just say this:

I lost count how many times he mentioned that I'm a man.
Mind you, I said to him "I never claimed to be a woman."

He brushes off his comments by saying they are "boyish antics"

But then the picture starts to get clearer.  He seems to have a problem with Gays and Transgender people.  My guess is that he sees them as "less than."


So why did I take time to address this?  More on that after the conversation. 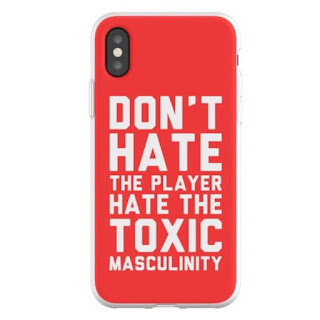 It all started with an Instagram user by the name of kaleviheinonen leaving a comment in reference to my above selfies.  Then that's where username soirlweed chimed in to point out that I am a "dude."  Then... well...check it out.

amnesiasparkles
@soirlweed it doesn’t bother me that @kaleviheinonen thinks I’m a beautiful girl. Does it bother you?

soirlweed
@amnesiasparkles "thinks" but your in fact a man 😂 im sure it doesnt "bother" you that he fell for your costume, if I we're to guess, I would say you dress like a woman to fool people into thinking your a woman, otherwise why the getup???😂

amnesiasparkles
@soirlweed I’m pretty transparent about who I am. I have a blog and have posted videos on YouTube explaining why I dress. You’re welcome to watch them if you’re curious.

soirlweed
@amnesiasparkles "transparentcy"? Your name is not likey to be amnesia sparkles, your a man, impersonating a woman. Wheres the transparency?

amnesiasparkles
@soirlweed my name is clearly stated on my profile Adrian Acosta. What’s your name?

soirlweed
@amnesiasparkles my page anonomous for a reason my guy. I was just givin the guy @kaleviheinonen I had no clue he was a homo

amnesiasparkles
@soirlweed I wonder why your page would be anonymous. And just because @kaleviheinonen leaves a comment thinking I’m beautiful doesn’t make him a homo. He might simply like to look at feminine people. If you like girls you would know what I’m talking about.

soirlweed
@amnesiasparkles amazing really, the reason my page is anonomous is a plant that can grow world wide is illegal 2019, even tho you can claim to be a woman even tho your a man and gain access to these gender specific safe places. Crazy I know..... oh my dude just called a guy beautiful, hes gay 😂 he might be almost as confused as you but hes for sure gay my dude

amnesiasparkles
@soirlweed I never claimed to be a woman and you seem to have a problem with your dude telling someone that they are beautiful. I wonder why that would bother you when it has nothing to do with you.

soirlweed
@amnesiasparkles the guy called you a girl?🤔 why are you dressed like a woman? Now your confusing me 😂

amnesiasparkles
@soirlweed I had a feeling you were confused. I know why I dress the way I do. Because I like it. Do you like the way you dress? Do you dress the way you want or are you afraid that if you tried on something different that other guys might make fun of you?

soirlweed
@amnesiasparkles maybe your right, im gonna bust up in my girlfriends panties right now my dude 😂 its the only answer to avoid boyish antics like making fun of clothes... wow your deluted, it doest matter what you wear, kids make fun, thats what they do, havnt you ever hearf the saying "sticks and stones may break my bones, but words will never hurt me". Its an oldy but goody and could do wonders for you

amnesiasparkles
@soirlweed oh well, in that case if you're ok with people making fun of other people, with "sticks and stones," then it won't bother you if people think you're a coward and a closeted homo when I tell my thousands of followers that you left comments on my Instagram pic. Why else would you make yourself known to me if you didn’t secretly want to get with me? Pretty girls probably don’t give you the time of day. Sorry little boy.

soirlweed
@amnesiasparkles go for it, your missing the point, i could give two shits if a man dressed like a woman wants to call me a closet homo for not considering you to be a "pretty woman", I cant help but notice your need to keep seeking aproval as a pretty woman, all things considering it makes perfect sense 😂 you are man, just deal with it dude. Iv spent far too much time here and ill agree its a little weird 😂 ya gotta love that logic, pretty girls dont have time for me so here i am chatting to a big burly dude who dresses like a woman, tuckin your nuts in like buffalo bill 😂 classic, ill also let you know i will be using this golden material on my comedy page, ill be sure to tag you in 👌

amnesiasparkles
@soirlweed you clearly don’t know me. You first think that I think that I’m a woman, you’re wrong on that count. I never said I was a woman. then you think I need validation from you of all people. Incorrect again. You seem to be a confused. I don’t think you know where you are dude. Im starting to wonder if you have any idea of what it is to be a man.

soirlweed
@amnesiasparkles bro your an imposter, a man who dresses up like a woman so you can be consisered if only on occasion a woman... you keep insinuating this conversation is only taking place because im upset you we're called a pretty girl, youve not stated that isnt the case as of yet? Why dress like a woman then? If your not trying to impersonate? Can we at least agree on some fundamentals, as in the fact transgenderism is a mental disorder?

amnesiasparkles
@soirlweed Why does it make you uncomfortable for me to post on my Insta a pic of me dress in feminine clothing? How does that even affect your life? And so what if some guys find me attractive? What's it to you? Some guys like feminine people. Are you attracted to masculine people or feminine people? How masculine are you? Oh, that's right I don't know because you're too afraid to show your face. 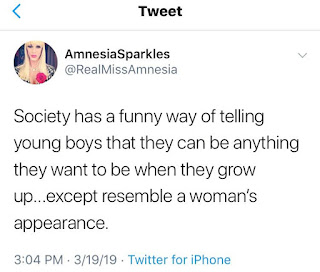 There you have it.

Let's not brush this off as "oh it's just another internet troll getting his kicks."  This is a good example of the type of mentality that is part of a culture that limits boys and young men in how they choose to express themselves.  Condoning this type of "boyish antics" from (let's call them what they are) bullies, does a disservice to our society.   Don't take my word for it, just watch the documentary The Mask You Live In for statistics on how we are failing our boys and young men in America.

I'm an adult who has had their share of these types of encounters so I know how to maneuver around them, but boys and young men are still experiencing this type of bulling.  Bulling that is based on social posturing, domination, and that uses the gender binary as a crutch to discriminate against those who present and express themselves outside the traditional gender norms.

If they want to become a man, or better yet, a contributing member of society, they will put in the time and effort to understand others and reach out and help in their time of need.  They will treat men, women, and anyone in-between with respect.  Simply put, they will subscribe to the Golden Rule:


“Do unto others as you would have them do unto you.”


Hopefully this has been an educational moment.

Thanks for reading
-A