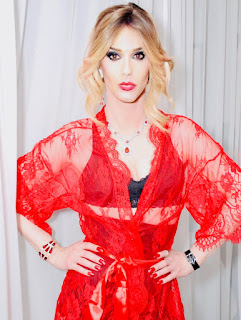 This past Saturday night was incredibly fun. I threw the second private party for my clients at my place. The theme was LINGERIE! So naturally most of us were wearing very little. At one point I even took off items like the red babydoll and the black short shorts I had on.  Yep, my ass was hanging out at the end of the night. lol  The FIRST GF Femme party was fun but this one was one for the books!

Only the girls to whom I've given makeovers were invited. Some girls came dressed but most got dolled up at my place. It was like being in the dressing room of the Rockettes but kinkier! 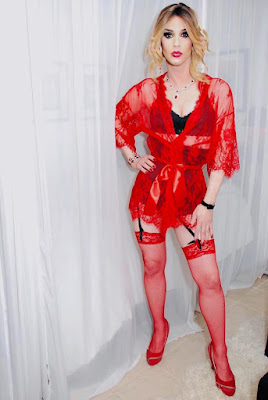 Outfit I wore for the party I threw for my clients.


One girl came all the way from Florida! Since these girls are top secret here's a pic of me with 4 of the 5 that were able to make it to this very special SECOND Gender Fun Femme party. 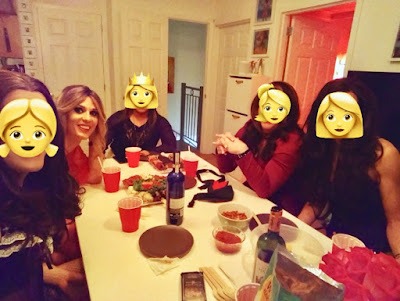 I love them so much!

So now to wrap up the party itself. I can't describe how great of a night that was for me. I felt phenomenal that night and that feeling has carried over, I've be feeling a dresser's rush so to speak ever since.

First I'm so glad that you let me come in early and laid out all the materials I would need. At first I was sure about the dress for me but when I put it on, OMG I loved it. My favorite part of dressing is wearing stockings and have the legs stand out and that dress made my legs dominate and look so good. And we had the same wig that worked so well the first time. I remember that outing I was called "biker chick from hell" this time I felt like the hottie too hot for hell . It felt great.

And you were your fun self and made me feel comfortable and welcome. Then Janie and Fran came into the picture and they were so easy to get along with. And then Rachel and Maria, everyone was so nice. And seeing them dressed up, just awesome. I knew this was special. Going down stairs for photos was an absolute joy.  I did enjoy watching those photos being taken and the sexiness of them.

So we all went up stairs and I do what I do most parties just listened and be entertained by the conversation at hand. And I laughed and learned.

As the night kept going I was just in awe of the atmosphere. And when you and Janie started dancing , ah yeah that was pretty incredible to see. But then the clock struck midnight for me and cindrella had to leave the ball. I didn't want to, I could have stayed in that outfit much longer and sucked it all in but I had to be responsible. 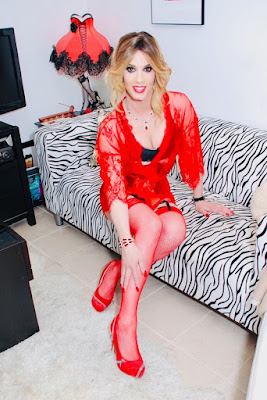