They Want Sex From Us While They Watch Us Die

What would I say to a man that wants to be intimate with Transwomen and/or Gender-variant folks but is not willing to come out of the closet and stand up for us? I believe the below conversation I had this past week in my Instagram DMs says it all.

GUY: May I ask, would you do me the honor of exposing me xxxx

ME: I don’t know what that means

GUY:  I’m clearly a confused little individual. I wish to feel vulnerable by the hands of someone else x
ME: All you have to do to feel vulnerable is to come out to the people in your life, your friends, family, employer etc. that is real vulnerability. 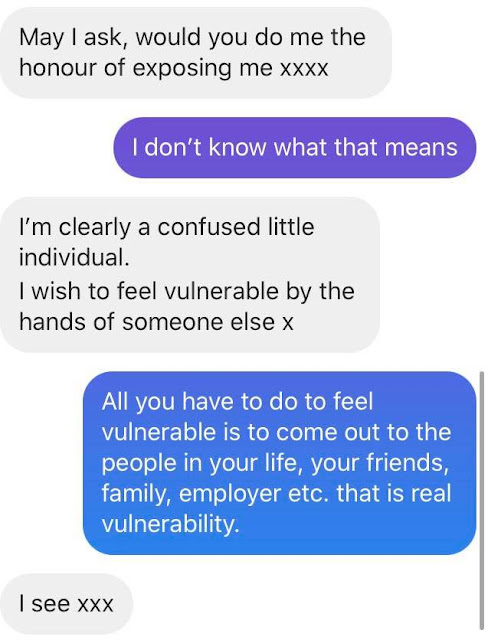 (I posted this portion of the conversation on my IG Stories and on the GF FB Page.
He saw it and replied with...)
GUY:  Oh my days!!! Naughty!!

ME: I’m getting DM messages from folks who find this very comical

GUY: That they find it comical x
ME: Well they do and some feel sorry that I get messages like that.

GUY: Oh gosh.  I don’t know what to say to that. I guess I should really back off.  I never looked at it that way
ME: It’s ok. I’m used to getting messages from men who are too scared to come out of the closet and really own up to their true desires in life. Who hide behind an online profile so that they don’t have to step up and be who they really want to be in real life. I think the problem lies there
GUY: In a perfect world it wouldn’t even be an issue, hard, a process. It would just be what it is. And cool. But it’s not like that.

ME: And there lies the problem.
GUY: It takes more people to step up and make the hard yards for people in future to come out easily.
ME: You can be one to step up but you don’t. So...if you’re not willing to be an example then what place do you have to be saying that it’s the worlds problem? Chew on that

GUY: With absolute respect. I am entitled to an opinion based on my perception of the issues at hand. Because I haven’t stepped up yet doesn’t make me any less of a person, it does make me less stronger.
ME: I never said you were less of a person or less strong that's something you came up with on your own. I'm just saying you can't blame the word for an issue you can help solve if only you stepped up to the plate. until then, you are simply not in the arena and your opinion has little weight.

GUY: I aren’t blaming the world, I just think it’s not educated enough to embrace difference yet. I’m not a meteorologist, but I can curse the wind and rain
ME: that's right, you are not part of the solution at this time.

GUY: What is the solution? In your opinion?
ME: becoming a public ally and advocate. and that's just the beginning

GUY: I mean bigger picture. What’s the solution? In your opinion
ME: if you're not willing to do the smaller picture what's the point of talking about the bigger picture?
GUY: Interestingly enough I’m actually shocked at why you are taking this stance with me.
You know how hard it is to make the step, you know what it takes and the sacrifices you make.
That aside. You also don’t know my background and what perspective and ideas I would bring to the table.  Not all ally’s are your own kind or your own race. Some are people who genuinely want a better world but just don’t have the balls or confidence to make that move.

ME: Listen, I'm just being as dry as possible here stating the reality of the situation. Yes coming out as a public ally is hard for some people, yes it presents challenges, but I call people out when they criticize the state of the world today yet they are not willing to step up to the plate to make things better for future generations. If someone doesn't have the confidence then they must find a way to build that confidence. They must go on that journey first. And when they are ready then they can stop hiding and start making a real difference in their communities for the betterment of those who are marginalized.

GUY: I take your point that you have more of a right to comment when you come out. There is no arguing with that. This isn’t a black and white situation though. And we both know that. Obviously I won’t put any of my own opinions your way in future. I don’t completely agree with your opinion, but you certainly have my respect for it.

ME: Listen, you're entitled to your opinions and you are free to send them my way but when you ask me to "expose" you, when you are not willing to come out on your own and live your truth and educate the world on these issue to make it easier for others and future generations then I'm going to say something about it.

GUY: And you did, and I feel it’s been an interesting topic and discussion x
ME: One that took place on Transgender Awareness week. Hundreds of Trans people were killed this year and yet we can't get some folks to come out of the closet to be our allies and advocates. They sit on the sidelines watching us die

GUY: Granted. I’ve had these feeling for a few months. To make a step as large as the one you are talking about me taking isn’t one that should be made in such a short amount of time. It is one that should be considered and done when you are truly ready. As far as the awareness week. I genuinely had no idea until I read your posts. It is shit, genuinely shit. Minorities of any kind should not be targeted and should not be made to feel so low and alone that they contemplate suicide. That is beyond horrible.

ME: Well dear, get informed. get strong. and get ready to come out and help us stop the discrimination that prevents us from getting jobs, housing, and the feeling of being safe walking down the street. And when you're ready to stand with us we will be proud to call you an ally. Until then, know that everyday you don't speak up and show up another trans and gender variant individual is killed, beaten, shammed, and tossed aside like yesterdays trash. You can help make this world better if you really want to

GUY: Leave it with me. I do genuinely appreciate and respect your comments. Since we have spoken you have been nothing but amazing with me. I’ll never shy away from criticism especially if it is warranted. I have food for thought. X 👍

ME: I have faith you'll be a great ally when you get older.  you're just a bit wet behind the ears right now