Read Between the Lines, Diversity and Inclusion

My first job right out of high school in 1997 was for a theater summer camp as a counselor. That theater summer camp also had a program which extended year-round after school.  The program would culminate at the end of the school year with a full stage production of a Broadway Musical watered down to accommodate a large ensemble of kids ages 5 - 12 and Teens.  I moved up the ladder and by the second year I ended up directing a couple of shows.  My group of kids were 5-8 year olds, and my goodness, they were adorable!  They had the toughest time remembering stage direction and even a harder time remembering lines, but their sweetness made up for their limited technical abilities.  The frustrating part of the job was dealing with "stage moms and dads."  Of course you think your child is a star.  Let's face it, it's usually parents who cause issues, because kids just want to be kids and have fun.

Back in the late 90's, when I was working with kids, in the eyes of the parents I was a Gay Man.  At the time I was also a drag queen having won my high school drag beauty pageant and doing regional shows in Florida. I don't remember if the parents knew that their kid's after school program director was a drag queen in his spare time, but I know I was never in drag around the kids.  I mean, not that it would have made a difference because being in "drag" is simply playing pretend and that is exactly what the parents were paying for their kids to do after school. 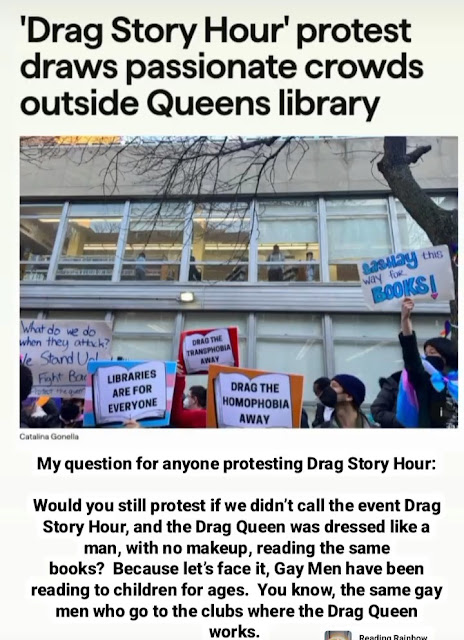 That was the late 90's. Flash forward to today.  Parents and adults are still causing issues for kids. We are living in a time where parents are still creating conflict regarding what their kids should and shouldn't be exposed to.  Drag Story Hour  is a prime example. Which by the way is a national 501 c 3 non-profit  company.  Adults causing a fuss about kids is no surprise.  In fact,  in 1985 the Recording Industry Association of America was forced to add a "Parental Advisory" sticker to audio works.  You know, to "protect children" from adult content.  I suppose the goal here was to preserve a child's innocence for as long as possible? But what does a "child's innocence" mean? And where is the fine line between trying to extend a child's innocence and keeping them ignorant to the variety and diversity of the human experience?

I'm all for protesting and bringing awareness to hazardous things, but is Drag Story Hour REALLY harmful to children?  Protesters in today's time think so. The fact that these protests have reached where I currently live, New York City, has me baffled.  What, or more specifically, WHO do these protestors not want around their kids?  After all, a drag queen, traditionally speaking, is simply a gay man dressed in an exaggerated feminine way. 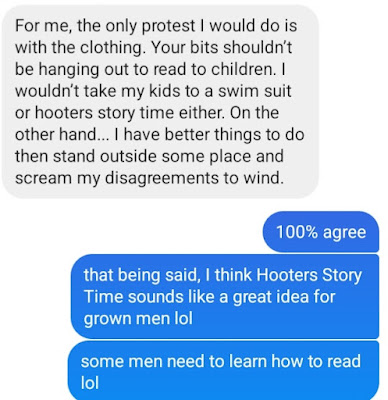 Growing up, and to this day, I've heard people say "don't flaunt your gayness in my face." Example the US policy from 1994 - 2011 called Don't Ask Don't Tell. DADT was the official United States policy on military service of non-heterosexual people. The military would turn a blind eye to gay people so long as they didn't reveal their sexual orientation to anyone.  That ideology lives on to this day in the eyes of protestors of Drag Story Hour.  It's fine if you're a drag queen so long as you don't reveal that in the presence of our children?

Let's face it, the general public has always seen men presenting in a feminine way  as problematic. Some would argue it's because of a rooted mysogynistic belief that men should NEVER express themselves in a "feminine" way, what ever that means. Because men ought to be superior to women.  Do we really want to "confuse" children about gender roles?

In these adult conversations we tend to forget that children don't REALLY care about gender roles.  What they really care about is whether the adults are fun and whether they feel safe around them. Kids don't really care how "different" we all are, they simply want to be part of the world in harmony.

In 2018 I found myself in the delivery room of my high school friend Christina's second child.  It was an amazing experience.  Seeing her bring a new life into this world was life altering for me. I'll never forget driving her to the emergency room.  She appeared so cool, while I was a nervous wreck.  Although I do not want to procreate myself I value and respect her choice to do so.  Every time we chat and she tells me how she is raising her kids I keep my opinions to myself because they are not my kids to raise.  That being said, I still exist and I am a part of her kid's life, as minor a role as I may play.  And that is at the crux of it all. LGBTQ+ people have always been present in the lives of children.  Kids simply see us as human.  Some adults on the other hand strip us of our humanity.
Mathew 19:14
“Let the children come to me. Don’t stop them! For the Kingdom of Heaven belongs to those who are like these children.”
Mathew 18:3
Truly I tell you, unless you change and become like little children, you will never enter the kingdom of heaven. 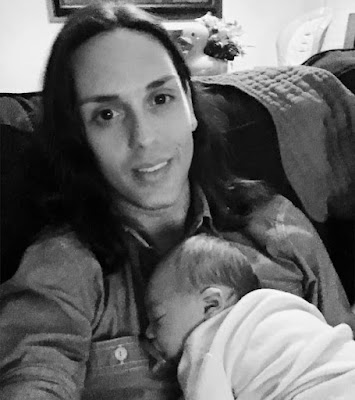 Me with my friend's Christina's kid days after his birth 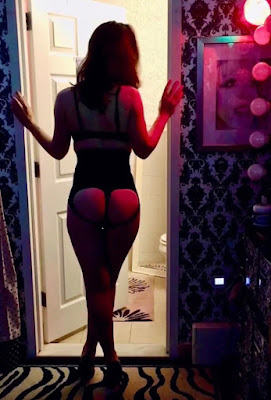